Whether you’re a hardcore gamer or a casual gamer, chances are you’ve either played or come across one of the more popular games back then: MapleStory.

However, so much has changed since then, with the Big Bang, new classes with dragons floating over their heads, and new maps with even weirder monsters. The real essence of MapleStory is so much different now.

For the sake of nostalgia, here are some awesome memories from the old MapleStory we all knew and loved.

Who could forget this spot, where people just came here to chill and relax? Back then, levelling was so tough that reaching level 30 almost seemed impossible unless you had no life. Instead, we hung around and just talked or flirted while passing time. Despite being a MMORPG which emphasis on levelling, we took the social aspect more seriously, and made plenty of friends.

Levelling was so mundane back then that doing party quests was the easier and more fun way to level up. Everyone would queue up in Kerning City around the sewer area and just wait for their turn to enter the quest. I believe the instance system was relatively new at that point in time, thus disallowing parties to enter at the same time.

Most players would end up downloading a software called ‘Autoclicker’, which did exactly what it’s named after, so as to increase their chances of getting in.

Probably the earliest form of boss fight you can encounter as a player was the King Slime in the Party Quest, where you had to kill it.

The damage it dealt was ridiculous and back then there wasn’t such a thing as tanks and aggro. This means that you had to jump out of reach and constantly deal damage to it at the same time.

Speaking of these little green cute’ses, everybody at the point knew that to maximise levelling, you had to train at the slime caves, where spawn rate for these green little dudes were the highest. These caves were located around the town of Ellinia, where the mages reside. Training here and also listening to the soothing music was surprisingly de-stressing, especially after a whole day in school where you had to explain why you didn’t do your homework since you were too buy mapling!

Probably the most memorable parts of the old games were the Background Music. They had almost the perfect combination of soothing and uplifting tones and were also addictive. They change as you travel so that it was hard to get bored of them. Have a trip back to nostalgia-land by listening to these:

People who reached here probably already had their 2nd job advancement and were ready to tackle the next stage of their levelling process. 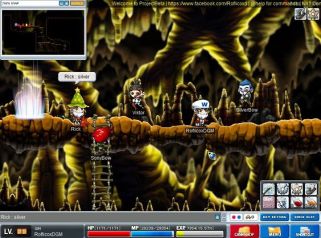 We used to challenge each other just to see how deep we can travel through Ant Tunnel before our entire party got wiped. Although seemingly a waste of potions, it was fun just to see who had the wit and skill to survive all the way till the end.

Sleepywood, especially in the Sauna Room, is usually where the infamous ‘Drop Game’ is played. A ‘Drop Game’ is like gambling, where each player (usually 2) would take turns to drop their items, and the other has a chance to snatch it up.

These quests were probably the by-product during the creation of hell. They were the true tests of patience, where you needed to accurately jump on each platform all the way to the top. One misstep or loss of tempo resulted in a fall that either required you to restart the whole process or death where you had to restart everything all over again.

Personally, I never got around to completing these quests. I’ve never regretted it.

Channel 1 of Perion will definitely bring back fond memories of the events that take place here. Forget the night markets of Taiwan or even any shopping mall during the holiday season. THIS was where the action was. 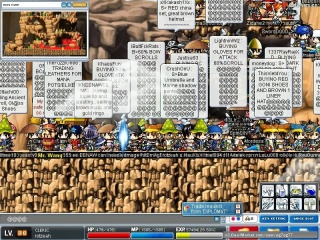 Players from all over Victoria Island would come and sell, trade or buy stuff there, using ‘@@@@@@@@@@@@@@@@@@@@@@@’ to help bring their chat bubbles slightly higher. There really wasn’t a need to go to the Free Market, since the action is all there.

Any MapleStory player would have at least seen someone either buying or selling ‘Fame’ in their journeys. In fact, ‘Fame’ was probably Maplestory’s first ‘service-orientated business’. A player can either give or take away another player’s ‘Fame’ once a day. People who wanted Fame (usually for some equipments or just for lulz) would end up buying them, while selling them was an easy 7,000 mesos a day.

Bullying was also done using Fame as well. When there was a certain someone you wanted to bully, you would call all your friends just to go to that person to ‘De-Fame’ him. This became such a huge sensation, especially for people who went through painstaking efforts to increase their Fame.

The hostile act of KS-ing, or kill-stealing, arguably started in MapleStory. This involved the act of killing the other player’s mob before they can deliver the finishing blow. By doing so, you deliberately lower the experience they can get from the monster. Once again, there was a thing where you could call all your friends and simply go out to mass KS a person’s mobs, slowing his entire levelling process. You may get sharp ‘CC!’ requests (which is a request to change the channel which you were playing in) or him just attempting to run away. However, MapleStory had a ‘Find’ function where nobody could escape from anyone’s target.

Probably the highest point of the Maplestory timeline was the opening of Orbis, where you had to pay for ticket to get there. After almost 2-3 years exploring the old Victoria Island, the opening of a new island was definitely appealing for all. 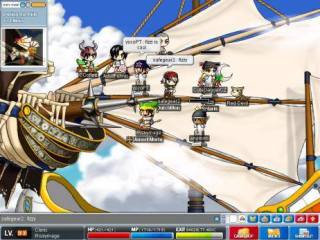 One particular instance then was the occasional appearance of the Crimson Balrog, which was the most powerful monster back then. It was probably the thing that would piss anyone off the most, after paying the money to get to the new island and ended up in a gravestone back in where you came from.

Overall, the general feeling of playing MapleStory wasn’t grinding for levels. Sure, there were people who set out to do that to reach the maximum level of 200. But realistically, 200 was a level so difficult to achieve that people don’t really bother.

Instead, we ended up partying and just exploring Victoria Island together. We could spend all day simply travelling from Lith Harbour to Henesys, Perion, etc. Or maybe visit new spots like Florina Beach or going deep into Ellinia forest. There was plenty to do and see, and we had fun every second along the way. Present players wouldn’t understand the feeling, since this isn’t an economical use of time (even WoW tries to promote map exploration somewhat by granting experience if you uncover new locations).

Other than MapleStory, MMOs in general has placed much more emphasis on the levelling, rather than the social aspect. However, emphasising too much on the social aspect of a game stagnates it (think Habbo Hotel, Second Life) MapleStory back then had a good balance of both to cater to all players alike. No matter the reason why you played the game, there is always a way to fulfil it, be it to be the highest level or just to hang out with friends.

So, what do YOU miss most when you were playing MapleStory? Comment below!